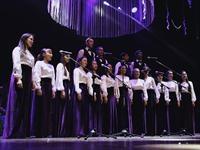 THE VICTORY IN ONE OF THE NOMINATIONS OF THE COUNTRY'S CHOIR CHAMPIONSHIP CUP HAS WON THE "RENAISSANCE" CAPELLA OF THE KAZAN POWER ENGINEERING UNIVERSITY.

On November 4, at the Puppet Theater "Ekiyat" there was hosted the Russian Open Cup of the choral championship. Eight teams from Moscow and the Moscow region, Kazan, Samara, Penza, Tyumen and the Maya Republic of the Sakha Republic, attended it. In total this year in the championship there were 172 musicians participated.

The winners were the three teams. In the nomination of "Mixed Youth Choirs" the choral chapel "Renaissance" of the Kazan State Power  Engineering University under the guidance of Natalia Kazaykina became the owner of the Cup. The choir performed four works that led to the victory: "The Venetian Night" by Mikhail Glinka, "The March" from the movie "Cheerful Guys" to the music of Isaak Dunaevsky, "We are waiting for change" by Viktor Tsoi and "Song of the Sea Devil" from the film " Amphibian Man".

"Our championship is a chamber event, so there are not so many choir participants. We are holding the cup for the second time, and again in Kazan. We chose the capital of Tatarstan because there are so many people who want to come to your city. For today, and it's not a secret, it's the third most popular after Moscow and St. Petersburg", told the IA "Tatar-Inform" Vladislav Pan'kov, the manager for search talent of the" Talents Salute" association. He also added that the Kazan championship is the qualifying stage to the final, which will be held in St. Petersburg in March 2018. The first gala concert in the northern capital took place in the Kazan Cathedral. Next year the final will take place in the State Academic Chapel.

The Open Cup of the Russian Choral Championship is one of the projects of the St. Petersburg creative association "Salute of Talents". The company has been organizing large-scale creative events for children and youth since 2008. During this time, more than 400 projects were implemented, of which about 120 thousand young talents became participants.