The KSPEU scientists has taught the lamps to "communicate" with each other.

By analogy with the "smart house", now the lamp will do everything itself: turn itself on and off, take care of security, and it can even become a part of the ecosystem with a  smartphone application. This system installation simplifies life, improves energy efficiency of artificial lighting.

One of the technology developers, a project manager and the " Electrical Engineering Theoretical Foundations " department's  head,  Marat Sadykov, has explained who needs "smart light"  and why.

The concept of a "smart lighting" is becoming more and more intelligent. Whereas previously the smart light adjusted itself to natural lighting or a man's presence in the room, now it's still easier and more mobile. Lamps have become the part of a single system with an automatic control. A program tuned beforehand gives information to the lamps not just about the object's presence, but also about its approaching.

"The lamps are connected with a wireless network. The difference between this technology and the other is that a personal computer is only needed for programming. After the process the system works automatically. Thus, the system operates without a centralized control unit, which will allow a user to replace the lamp or add a new one without a specialist not breaking the system, " explains the project manager. 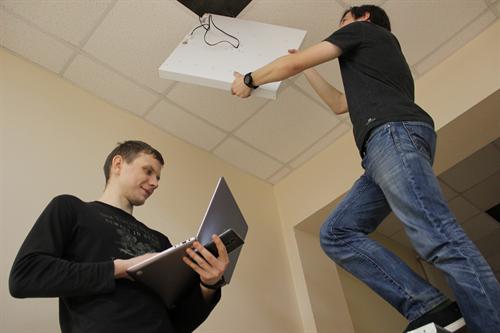 One more beneficial effect is the right to choose. Like any innovative solution, "smart light" is functional and adapts to you, depending on the conditions. The conditions, however, can be very different: from a particular space to the time of day. The user has the right to regulate the "smart light" for any of the given scenarios: to add brightness depending on the time of day and illumination level, to create different light scenarios, to monitor current consumption.

"You can create, save and adjust lighting scenarios of any complexity, consisting of any effect  numbers, monitor the entire system, add new devices to the network, turn on or off the light depending on the people's presence or absence in the room, as well as depending on the day time,as well as set a timer, " notes Marat Sadykov.

The project was launched in 2016, and in 2017 it was put into operation. The "smart lamps" are now functioning in the buildings of the Power Engineering University. The studies have shown energy consumption savings up to 40%. This is due to the fact that there is no necessity to install powerful and expensive microprocessors into the lamps, implementing complex control algorithms, as well as with an economical maintenance - any replacement is possible with the help of an ordinary electrician.

"The economic advantage of such a system over analogues is achieved through an inexpensive element base. In addition, the lamps work autonomously, without control from a personal computer. A personal computer or smartphone is only needed if new algorithms are created or manual control is needed, " emphasizes Marat Sadykov.

You can control the lamp and without getting up from the couch - just picking up the phone. A special program on your smartphone will allow you to add brightness or turn off the light when it's necessary. Another interface is security. The lamps are always ready to help in an emergency (an accident, a fire, etc.) and "to inform" movement and evacuation direction.