In Tatarstan, by tradition, the real breath of winter comes precisely in January: the first frosts, unplanned icing, which causes not only traffic accidents, but also accidents on power lines. Every year the republic's power engineering specialist are struggling with nature forces not to leave thousands of houses without heat and light.

One of the project developers, the KSPEU associate professor, Vasil Kasimov, answered our questions and told us what makes the technology truly unique.

Ice is a real disaster for power lines. The most dangerous is icy rain, but even in the conditions of a "mild" winter, droplets of fog or rain settle on the wires, covering them with a dense ice "muff". As a consequence, because of them the wires break, the power lines supports break down.

"Thousands of houses are left without heat and light. Such accidents cause significant economic losses. It takes several days to eliminate them, and huge sums of money are spent, " emphasizes Vasil Kasimov.

So that cities' citizens will not finally switch to wood and candles, the Kazan State Power Engineering University scientists came up with the decision how to make the problem not only to eliminate but also to prevent. The technology is simple and based on a "digital" remote principle. The installation "warns" of the danger and, when it occurs, a signal goes to a substation, workers take action to melt the ice.

"The equipment makes it possible to observe the wires condition, reveals the slightest ice appearance on transmission lines. When the ice thickness exceeds the normal level, a signal is sent to a dispatcher and the workers prevent an accident ".

In the сase when snowing happens unexpectedly and the power lines does break, then the mechanism works in the so-called "after-fact" manner, namely, it determines the distance to an accident site.

"The system allows us not only to save the light, heat to the population, but also power engineers' energy. And what is the most importantly - funds. The equipment indicates a specific accident place, if it occurrs and thus saves time and money. The repair team immediately leaves in the right direction, not searching for the accident site, "notes the KSPEU  associate professor. 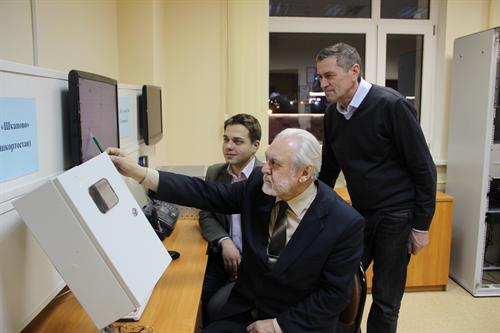 It did not come at once - the research lasted for almost 20 years. Together with the RT Network company experts there were held test experiments. Now this system, created by the KSPEU scientists, is operating within not only Tatarstan, but also Bashkiria, and North Caucasus. These territories of Russia are known to be exposed to ice mostly. These difficulties had to be overcome with expensive and inconvenient means. By the way, the digital technology allows you to "save" wires in an automatic mode without a human intervention.

"This is the first installation in Russia, which practically "predicts " the future. We have focused on danger prevention," explains Vasil Kasimov. "There is enough research in this area. As a rule, they are related to how to eliminate accident consequences, without seriously hitting your pocket. However, we set ourselves a different task: to deal with the problem before the consequences. "

The development was noted at the state level. The KSPEU specialists research in this field was supported by the Ministry of Education and Science of the Russian Federation. The Kazan researchers received a grant of 45 million rubles for three years to implement their  project.